The Blue Denim Deals without The Arms 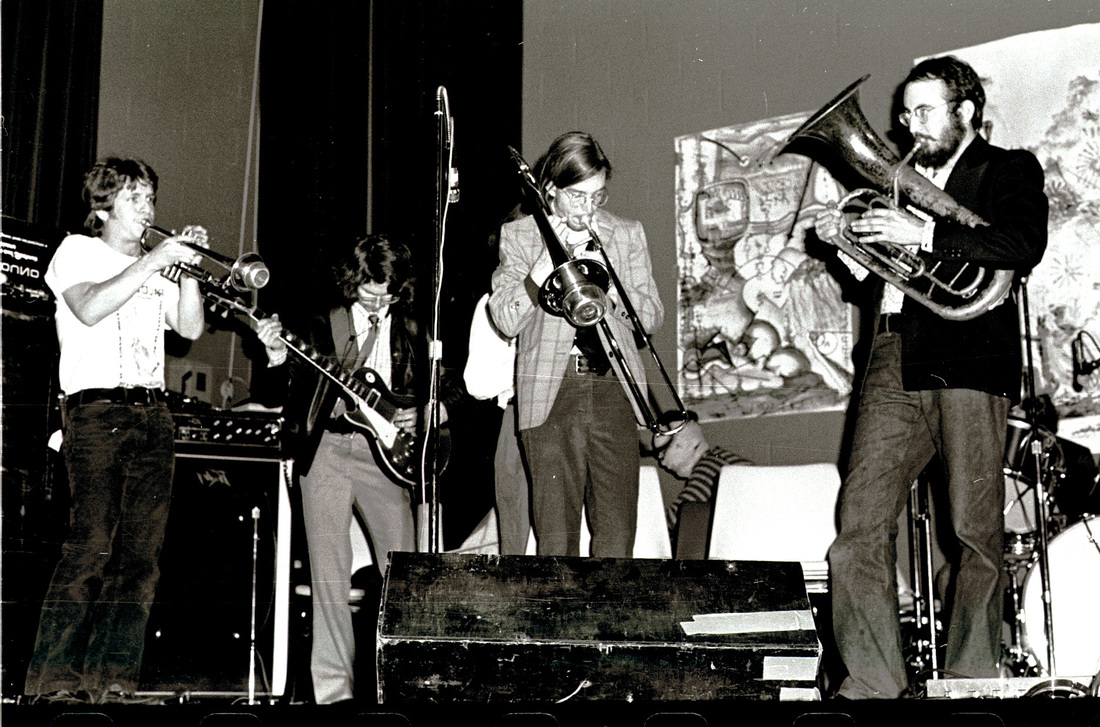 The Deals Performing at the Raudelunas 'Pataphysical Revue in March 1975. L-R Nolan Hatcher, Davey Williams Mitchell Cashion, Craig Nutt. Photo: Doug Newby
Started by Roger Hagerty, Nolan Hatcher and Craig Nutt around 1970, The Blue Denim Deals Without the Arms were a precursor to Raudelunas.  Originally a rock-based group, the music became more experimental and improvisational as they found they could rent a wide variety of musical instruments from the University of Alabama for a nominal fee. 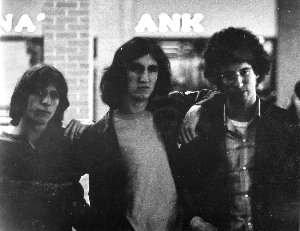 L-R: Hatcher, Nutt, Hagerty-BDDw/oTA ca 1970
A seminal lost recording made with William and Leah Alford around 1970 further expanded the aural repertoire to abstract vocalizations.  Around 1971 pianist Jim Willett and guitarist Mike Ellis joined the group, bringing with them a jazz element.  This group played occasional gigs including a weekend rock concerts in which their performance was reviewed as "frantic, decidedly nonlinear."  Most public performances were confrontational, the organizers rarely aware of the nature of the music they were about to hear.

Most activity consisted of recording sessions, and as other musicians were invited to participate, the group gradually grew into a large improvisational unit.  Among the first musicians joining in this expansion was guitarist and soon to be multi-instrumentalist Davey Williams.  His account of his first encounter with the Deals is recounted in a 1991 interview with Ed Baxter in LMC News.

As noted, demand for improvised musical performances was light in Alabama in the early 1970's. However, a last-minute cancellation of a band resulted in the opportunity for the Blue Denim Deals to perform on "Movin' Out" on the Alabama Public Television Network. With a couple hours notice, Roger Hagerty, Nolan Hatcher, Craig Nutt, Jim Willett, and Mike Ellis assembled at the public television studio on the University of Alabama campus for a half-hour live dinnertime broadcast to an audience expecting pop music. They were billed as "The Blue Denim Deals Without the Arms featuring, on Tenor, The Lonely Astronaut." A tape of the performance was accidentally recorded over - a tape henceforth referred to as "Dada Destructo."

Another notable performance occurred at an outdoor rock concert at the University of Alabama Woods Quadrangle. Hagerty, Hatcher, Nutt, Willet, and Ellis were joined by drummer Steve Jones. From the opening of John Coltrane's Selflessness, the concert organizers appeared disturbed, and began demanding that the band leave the stage. The band persisted for several additional numbers before completing a relatively brief but high-impact set.

A large group session held on May 21, 1977 at Trans Studio was released in 1978 as 'Armed Forces' Day.  Only 300 copies with hand-silkscreened covers were issued.  By the time of this release, Trans Museq had released the first of it's more focused, small-group recordings, and the improvised music scene would soon fragment between Tuscaloosa and Birmingham. The Blue Denim Deals continued to be a catch-all moniker for open, large group sessions from time to time.
Proudly powered by Weebly